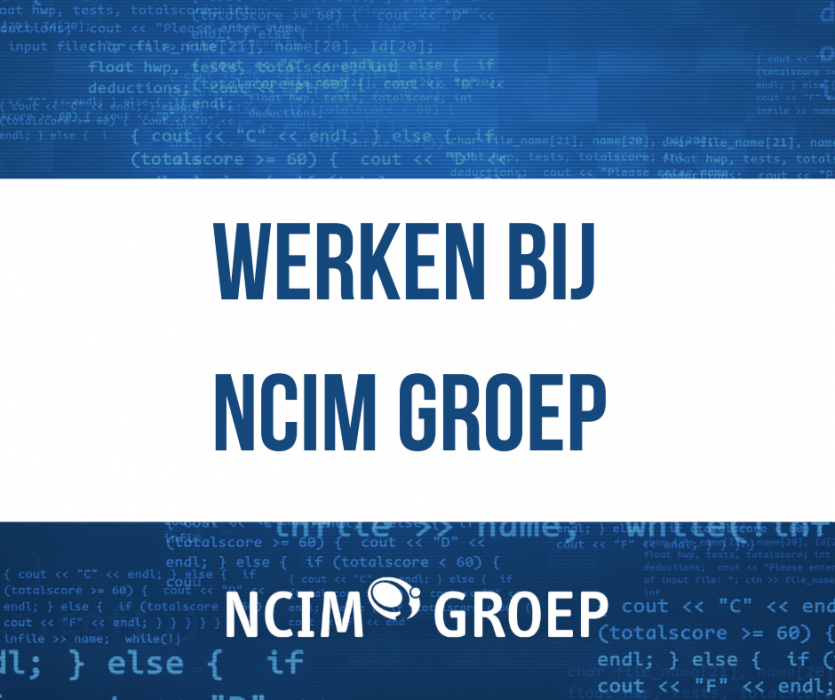 NCIM Groep is specialized in carrying out IT assignments, projects and product development. More than 200 skilled professionals build ICT solutions for clients in the sectors Defense and Security, Energy and Utilities, Telecommunications, Transport and Media, and Technical automation.

Guus has been working at NCIM Groep as a Junior Software Developer since January 2019. After his studies in Mathematics and Astronomy, he began to prepare for the next step. His interest was in Data Science or Software Development. He came into contact with NCIM and the organization attracted him. Especially the possibilities that NCIM offers. You get a new project with every customer, in a new environment and you learn new techniques. In addition, the corporate culture appealed to him and he regularly undertakes fun activities outside of work with fellow NCIM employees.

From there the ball started rolling. Guus ended up completely blank in the field of IT at NCIM. During his training he has built up the basic knowledge but no experience with more complex techniques. Guus followed the traineeship program at NCIM. During this program, Junior Software Developers are able to obtain two certificates within two months. With the C # .NET and Javascript / HTML / CSS certificates in their pocket, they are Junior Full Stack Developer after the traineeship.

“During the traineeship I learned the basics of programming, but after those certificates you are obviously not there yet. I had never built a website before, so I obtained a Web development certificate after my traineeship. To get real experience with it, I worked on internal projects and I really learned a lot from them. ”

“Shortly after obtaining my certificates, I came into contact with the NFI. Positions became available for Junior Developers and I was soon able to come by for an introductory meeting. The conversation was with the department manager and immediately gave me the feeling: “Yes, I want to work here!”. I was soon told that I could start. In total there were thirty other candidates. My experience within NCIM contributed to me being selected for the position; I obtained several certificates until just before my start."

"My workplace was a lab they had converted into an office space and I looked out on a bunker where bombs are being investigated."

“The project was a replacement for an old program. It had been running for 20 years and was therefore ready for renewal. This program contains all information about all cases, research materials and results. My role was Full Stack Software Developer, but I actually had a 360 degree role. For example, I also had to contribute ideas about architecture. The NFI had already started building and we could continue on that. After the induction period, the team was divided into three Scrum teams with both interns and externals. I ended up in the workflow project. There we worked on software that maps all processes. This software makes it easier for employees to search for open tasks.”

“When I started at the NFI it took a while to find where to start. I had to catch up a bit, but after I put my maximum effort I was soon able to participate. What I love about the NFI is that it is not a software company. They do forensics and you qualify for that every day. My workplace was a lab they had converted into office space and I looked out on a bunker where bombs are being investigated. Next to us was a lab where they do research with microscopes and they examine corpses in the same building. I have not seen that, I was spared that trauma!”

“My assignment at the NFI has been a good first assignment! We have used many new techniques and that has enabled me to learn a lot. I am very much looking forward to the next assignment and I already see many interesting assignments passing through the account managers. For example at Europol and the Ministry of Defense!”

Also curious if one of our projects suits you? Let us know by sending an email to l.duvekot@ncim.nl and we will contact you!